Spirituality prepares us for natural disasters and unexpected events

Science has failed to predict calamities which have never been experienced before. Saints, on the other hand, have predicted such things.

On the evening of August 20, 2009, the Canadian city of Vaughan (just north of Toronto) got hit by a series of tornadoes. The tornadoes were completely unexpected as the “Tornado Alley” of the region runs much further west of Vaughan. A later search on Wikipedia showed that there hadn’t been any reported tornadoes in Vaughan up until then.

I was interested in this because while I live in Toronto, and we did not get the tornadoes, I witnessed the storm that brought them. My first reaction to the storm was that of disbelief which soon changed to awe tinged with fear. Watching it, I forgot what I had been doing when it started. 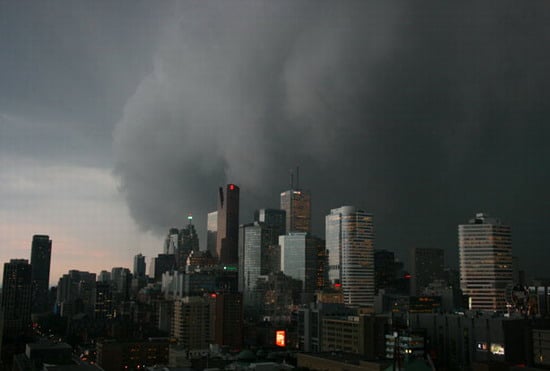 It would not seem easy to prepare oneself for something like a natural disaster, or for any kind of emergency for that matter. Even safely tucked away in my apartment, I could not help getting absorbed in the event which was unfolding before us as I observed the might of nature.

Although many rationalists of the 21st century boast about the progress made by science, nobody was actually able to warn about many of the serious disasters of the last few years, such as the South Asian tsunami or the more recent China earthquake. The limitations of science can be observed during such calamities.

One of the reasons given by the Indian weather observatory for not predicting the 2004 tsunami was, “India has never before experienced a tsunami, which made it hard to predict”. Even in the scientifically advanced and hurricane-prone US, hurricane prediction specialists admit that although hurricane predictions are improving, there is a lot to be wished for. This shows that though science has advanced, to a large extent it is still not able to understand nature.

Science has failed to predict calamities which have never been experienced before. Saints, on the other hand, have predicted these things.

His Holiness Gagangiri Maharaj has said that the coming period will be so bad that even Saints think that They would be better off leaving Their gross body during such bad times. Thus, as predicted by Saints, the upcoming times are going to be difficult. As found through SSRF’s spiritual research too, there will be more natural disasters. The natural disasters will cause scarcity of day-to-day necessities like food, water, electricity, petrol.

However the most important thing is that Saints haven’t just given warnings but have even suggested the means to overcome these calamities by guiding people to increase their devotion towards God. Our devotion can be increased by performing daily spiritual practice as per the six basic principles. It is by following these basic principles, and learning how to offer our body, mind and wealth that we can build enough spiritual strength to sustain ourselves in difficult circumstances.

While I was very lightly affected by the unexpected tornado storms, for me they were a welcome reminder of the predictions given by Saints, and of the need to intensify my spiritual practice in order to prepare for the times ahead.