Depending on the context, the Swastika is recognised as one of the most auspicious or heavily vilified symbols in the world. It originated as a sacred symbol in Hinduism, and it was also used by other Eastern religions.  Despite its sacred origins, the Swastika has become so widely associated with Nazi Germany that any contemporary usage of the symbol frequently incites controversy. So, is the Swastika symbol spiritually beneficial to society or not, and should it be embraced or discarded ?

Our spiritual research shows that every symbol or sign emits subtle vibrations. These subtle vibrations can be positive or negative. We need to study the spiritual vibrations which any symbol emits, as these vibrations will have an effect (which can be positive or negative) on the people who embrace it. These were the conclusions of the paper presented by Mr Sean Clarke. He was speaking on 23 August 2021 at ‘The International Conference on Innovations in Multidisciplinary Research (iConference) New Delhi’, organised by iConference, New Delhi. He presented a scientific paper titled ‘The spiritual difference behind the Hindu Swastika and Nazi Swastika’ for which he received the ‘Best Paper Award’. 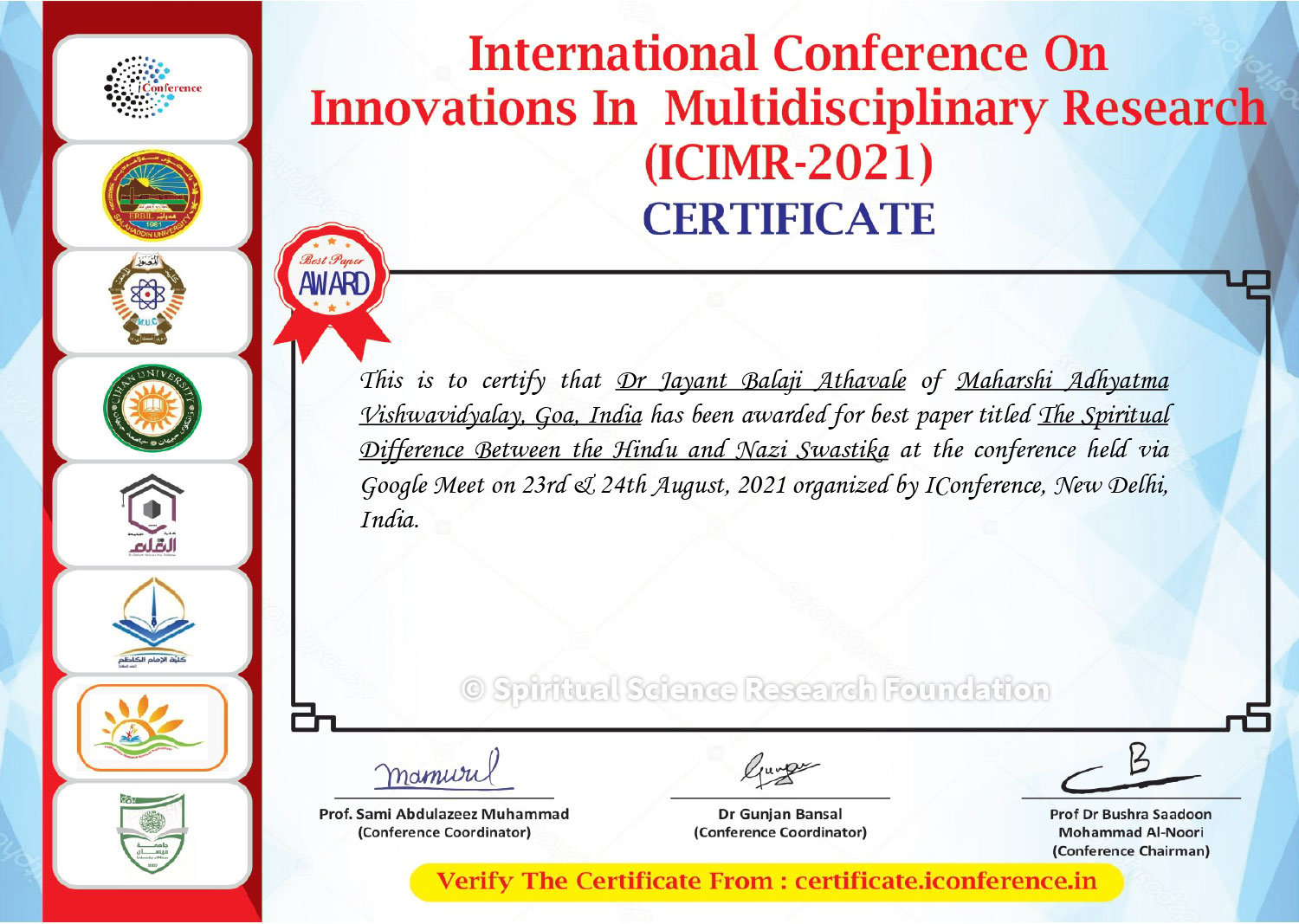 Ninety presenters from over 10 different countries participated in this conference. This was the 78th presentation by Maharshi Adhyatma Vishwavidyalay (also known as the Maharshi University of Spirituality or MAV). MAV has so far participated and presented research papers in 15 National and 62 International Scientific Conferences.

Authored by Paratpar Guru Dr Jayant Athavale (Founder of MAV) and co-authored by Mr Sean Clarke, the paper’s findings on the Swastika piqued the interest of the audience and was received well.

Sean shared that, with 40 years of spiritual research experience, the team at Maharshi University of Spirituality has studied the Swastika in great detail from a spiritual perspective. This research has been conducted by using aura and subtle energy scanners along with the advanced sixth sense of its research team.

Listed below are some key aspects (found through spiritual research) related to the form and the colour of the Swastika, which can significantly affect the subtle vibrations it emits.

It was found that if depicted incorrectly like the Nazi Swastika, it emits negative vibrations. On the other hand, if depicted in a spiritually correct manner like the Hindu Swastika, it was found that the Swastika has the capability of attracting and emitting positive spiritual energy. In such a form, it can be utilised decoratively for auspicious occasions as it provides a spiritual healing effect on the immediate environment.

Special Comments by the attendees: