Earlier this year, an actress from Hollywood made use of the Spiritual Science Research Foundation’s research on ghosts in order to prepare for the role of a person who is haunted by an evil spirit. 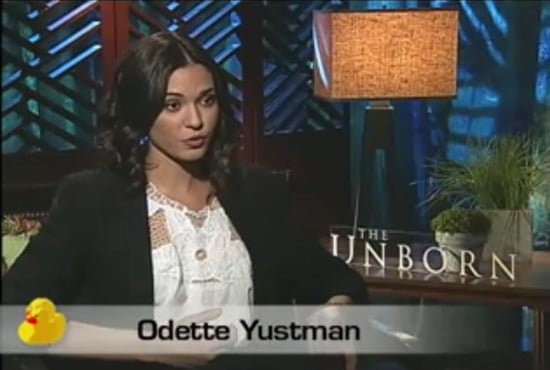 The Hollywood movie ‘The Unborn’ features a character troubled by a ghost, and this haunted character is played by actress Odette Yustman. Odette Yustman had studied an SSRF documentary on ‘YouTube’ in order to prepare for the role. She spoke in a programme called ‘PopTub’, a daily telecast of best Youtube videos. In this interview she mentioned that the documentaries on possession were very helpful to her.

It seems that many more are following suit and studying the phenomenon, as the viewership on our ‘Violent Demonic Possession’ video crosses the 420,000 mark.

But what sets SSRF’s videos on ghost possession apart from many of the now popular TV and video broadcasts on subjects of the paranormal, hauntings and ghosts?

Here we give two distinct features of the videos and research undertaken by SSRF.

1) Study of causative factors behind attacks by ghosts

Most of today’s researchers of the paranormal try to capture visual apparitions, sounds or other sensory appearances primarily through the medium of technical gadgets and equipment. These are by and large in fact very superficial manifestations of lower level ghosts. Apart from that, technical equipment is in itself able to measure only very gross aspects of the spiritual dimension.

SSRF by virtue of very advanced sixth sense (gained through spiritual practice) studies ghosts and negative energies right up to the root – including details of their form, mind, intellect, and causative factors behind their attack. Without this in-depth knowledge – coming to any conclusion about an entity’s appearance or its characteristics and motives proves futile from the perspective of science.

2) Studying the entire spectrum of ghosts

The average researcher of the paranormal is limited to studying lower level entities. These include orbs, most of the ghost apparitions we see captured on photographs or on video camera, etc.

The more powerful ghosts would target only a spiritual organisation that is active in collective upliftment of society at large. SSRF is one such organisation. Its work also has the backing of a number of Saints. This is extremely important because it is only in the unparalleled positivity of a Saint’s presence that the more powerful ghosts manifest or put up real opposition. SSRF has therefore been able to study the whole spectrum of ghosts right from the lower level common ghost, to the ghosts of highest power known as mantriks.

Have you noticed any other salient features of SSRF’s videos? Have they helped you understand the unknown realm of negative energies? What have you experienced watching them? Drop us a comment below.