Dogs, sixth sense and Saints – A remarkable story about Sophie the Labrador 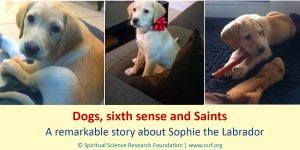 Apart from being in the company of seekers, Sophie is the other reason I love going to the home of my co-seekers Amit and Nidhi. Sophie is this gorgeous 3-year old Labrador who is very loving and beautifully mannered.

But she was not always so.

Just over a year ago, she was the most excitable Labrador, constantly jumping on us. That was the only thing I would have wanted to change in her – her hyperactive nature. One constantly needed to tell her to calm down. 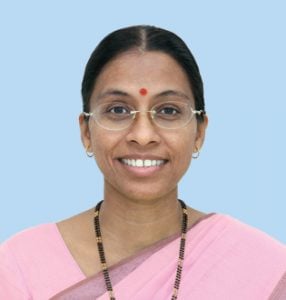 And then one day, almost as if a switch got flipped, Sophie was a different dog and was loving but calm. Interestingly, the change coincided with the imminent arrival of Her Holiness (H.H.) Bhavana Shinde to Amit and Nidhi’s home. Her Holiness Bhavana Shinde is a Saint from SSRF whom we fondly refer to as Pujya Bhavana. As we started to prepare the house for her arrival, we all noticed the marked positive change in Sophie’s behaviour.

I love dogs, but I only started to notice their extrasensory perception after being exposed to the research that SSRF had conducted on animal behaviour in response to spiritual vibrations.

So, when Sophie suddenly calmed down and began to be the perfectly well-behaved loving Labrador, it piqued my interest. When Pujya Bhavana arrived, on cue Sophie went to greet her, nuzzling up to get patted – there was no jumping. Everyone noticed this and remarked about the change in Sophie. Even though this was the first time Sophie was meeting Pujya Bhavana, she displayed a closeness and familiarity as if she knew Pujya Bhavana for a long time. If the door was open, Sophie would invariably meander into the room where Pujya Bhavana was staying, wagging her tail with ‘pet me’ written all over her face and body language. 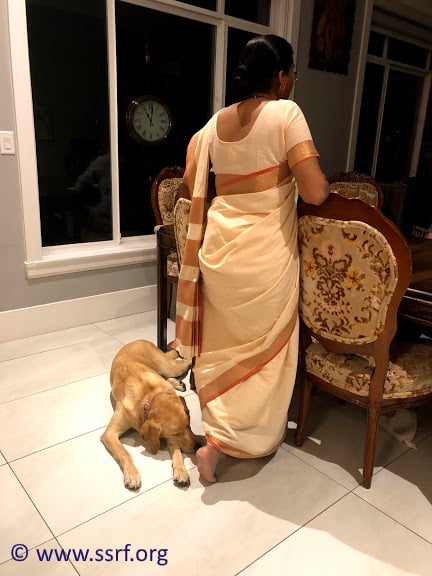 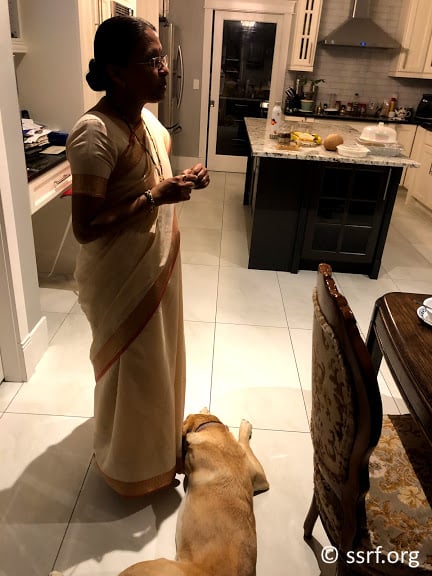 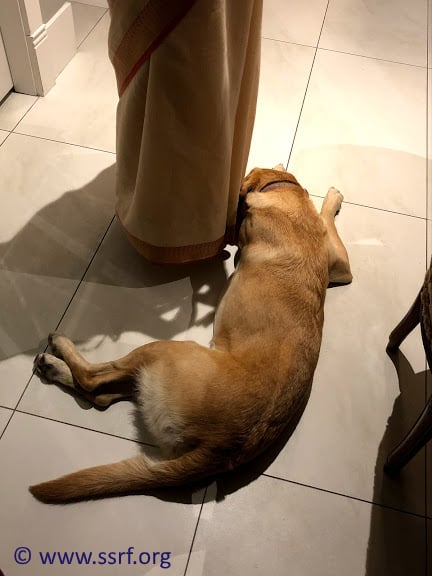 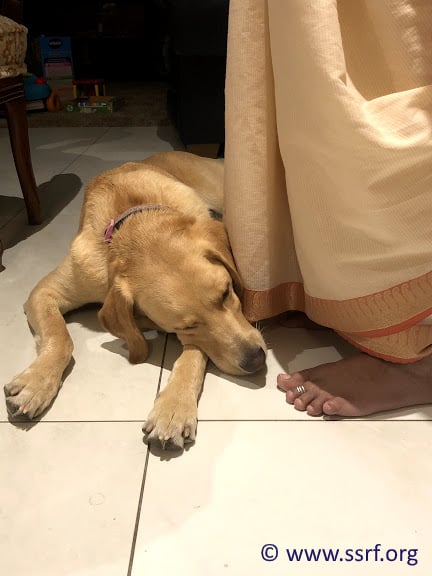 Spiritual research has shown that the maximum positive energy is emitted from the feet of Saints. Animals and birds are able to sense these positive vibrations. We have observed in a number of experiments when animals and birds come in touch with Saints, their demeanour becomes really calm and they generally position themselves at the Saints’ feet. From Sophie’s behaviour that night, we all felt that she could not get enough of the positivity from the Divine consciousness being emitted by Pujya Bhavana. Like young children, with dogs there are no pretences – what you see is what they are feeling. On many occasions, I have observed first-hand how dogs are sensitive to both positive and negative subtle vibrations. While negative vibrations unnerve them and can set them barking or howling, positive vibrations make them feel safe and calm.