Insights we gained from comments to a Youtube video of SSRF

From the year 2007, SSRF has uploaded videos to Youtube on different subjects related to Spirituality with the aim of educating society about the spiritual dimension. Currently there are more than 60 videos uploaded to the SSRF Youtube channel (www.youtube.com/SSRFINC), in various languages.

The most visited video by far is ‘Violent Demonic Possession’, consisting of 2 violent manifestations of negative entities:

1) A lady seeker possessed by a demonic entity rolling on the floor while being choked by the possessing entity
2) A higher level negative energy possessing a lady seeker that is fighting with His Holiness Dr. Jayant Athavale while He meditates.

The video received an astonishing 4.3 million visitors between October 2010 and October 2011. 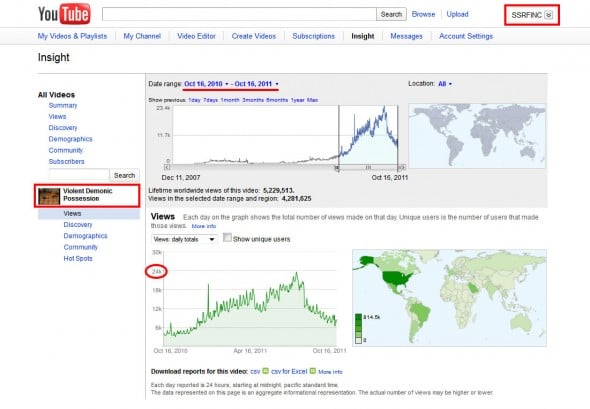 [click on the image to view it in full size]

Currently there are almost 6 million views of this video. Visitors are leaving approximately 10 comments daily. There are thousands of comments.

In this article we give an overview of the type of comments we receive for this video.

Most of the comments can be grouped in several categories, as follows.

This set of comments are a valuable source of information through which we can assess the current state of society.

Unfortunately we can observe that the vast majority of the population (around 80%) is lacking basic knowledge about the spiritual dimension to such an extent that they are completely unaware of its existence. Also, we can see how much society is influenced by negative energies at large by the way tamasik conducts are spread as common and acceptable behaviour through the freedom of expression, choice and democracy (drugs, drinking, showing disrespect, swearing, sarcastic comments, being ungrateful, etc.)

The minority that has some knowledge and percentage of truth about the spiritual dimension are usually restricted to having knowledge as per the religion that they follow, or through their personal experience. They are usually unaware of the limitation of their knowledge, yet present themselves as ‘knowledgeable’.

However, even if only a few realize the importance of the knowledge presented in these videos and they are inspired to help themselves in their spiritual progress, then our aim is fulfilled and we will continue putting selfless efforts in educating humanity about spiritual dimension and its effects on us.

Comment of H. H. Dr. Athavale:  Now 60% of the world population is laughing at demonic possession, in 10 years only 30% will be laughing, and in 100 years nobody will be laughing.