Why 70% of psychiatrists themselves suffer from mental illness

Have you ever wondered why psychiatrists themselves suffer from depression or some form of mental illness?

While seeking guidance from His Holiness Dr. Athavale on a spiritual research topic, He mentioned something which would be of value to psychiatrists. His Holiness Dr. Athavale was Himself practicing as a clinical hypnotherapist until He came fully into spiritual practice. He mentioned that as many as 70% of all psychiatrists suffer from some mental illness themselves especially after years of practice. 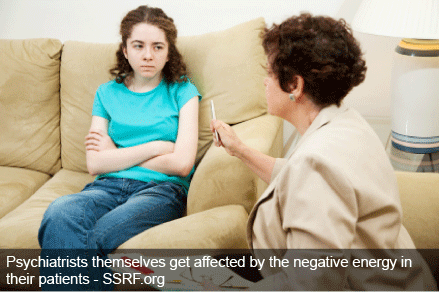 The main reason for this is that they deal with mentally ill patients who in turn most of the times (90% of the time) are affected / possessed by negative energies or departed ancestors. This means that in 9 out of 10 cases of mentally ill patients that a psychiatrist treats, the root cause of the patient’s illness is in the spiritual dimension.  The psychiatrists themselves having no subtle ability cannot perceive that many a time they are actually dealing with or talking to negative energies. When they try and help the mentally ill patient, they quite often enrage the possessing entity (negative energy) that ends up attacking the psychiatrist at a subtle level. This is the main cause of why psychiatrists become patients themselves and show signs of depression, suicidal thoughts and other behavioural changes which resemble a psychiatric patient. Understanding this aspect and the spiritual dimension and its impacts on mental health can help psychiatrists put spiritual measures in place to both protect themselves and also better help their patients.