Taking advantage of the advancements in biofeedback machines, SSRF has been using these machines to study the effects of various stimuli on our auras, energy systems and chakrās. One such machine is the DDFAO, which is basically a French acronym which stands for Computer-Aided Screening and Functional Diagnosis.

2. How we came to use the DDFAO equipment

Dr. Elvedina Manko, a practising homeopath from Bosnia, Europe, and a seeker of SSRF, introduced us to the electrosomatographic technique. She kindly allowed us the free use of her DDFAO machine through the complete series of these experiments during her visits in 2008 and 2009 to the SSRF ashram in Goa, India. She trained us in the use of the machine and the analysis of readings. She also participated in the study. We conducted 40 experiments on 200 seekers from around the world during their visit to the SSRF ashram in Goa, India and recorded 4000 readings.

DDFAO is an imaging medical device, which looks for the functional state of the different organs and systems of the human body. It is a medical device which reliably measures impedances in the bio-electro impulses, by means of six flat electrodes, and accurately determines body parameters like pH and blood pressure, by means of highly integrated electronic circuitry. DDFAO’s integrated technology is also able to interpret this data by applying neurophysiology principles and automatically proposes its own analysis of the patient’s risks in less than 3 minutes (measuring time included).

DDFAO measures the body’s electrical activity, actually using the same principles used in the well-known EEG and ECG machines. However, instead of focusing just on the brain or heart activities, DDFAO applies the technique to the entire body, to record an ElectroSomatoGram (or ESG).

The equipment that comprises the DDFAO kit is:

The electrodes come in contact with the person’s hands, feet and forehead. Then, a very low electric current is passed through the body of the person, thereby measuring the body’s electrical activity. By running various algorithms, the readings are finally displayed on a computer in a graphical format.

4. The aspect of DDFAO that SSRF uses

Among the various aspects of body functioning that DDFAO analyses, we focused upon the readings that correspond to the Kunḍalinī chakras in the body.

We are all aware that there are various functional systems such as the circulatory system, the respiratory system, the digestive system etc. in the body of a person. In addition there is a subtle energy system, the Kunḍalinī system, which provides energy to the physical body and the subtle body. All systems except the energy system can be seen upon dissection of a human body. However, those with an advanced sixth sense can visualise the Kundalini system too. Just as the other systems have their centres, for example, the centre of the circulatory system is the heart; this energy system also has subtle centres which are called chakras. There are seven Kundalini chakras which are responsible for providing subtle energy to the various corresponding organs and functions of the individual. 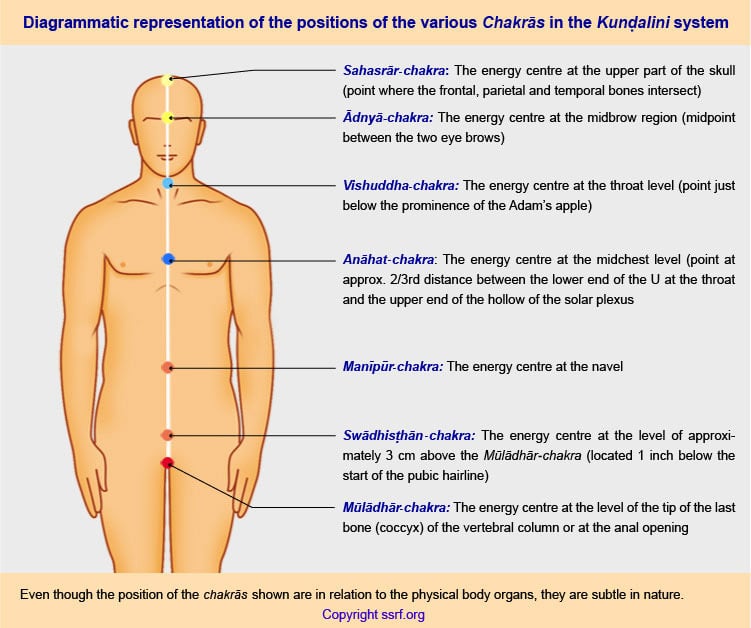 4.1 Relation between the Kundalini chakras and the functions of the various organs of the body

4.2 Why we chose the readings of the Kundalini chakras?

4.3 Words coming up in the DDFAO scanning equipment corresponding to the Kundalini chakras

4.4 Various ways of receiving information on the Kundalini chakras and their meaning

The DDFAO equipment gives information on the status of the seven Kundalini chakras in numerical form as well as in the form of coloured bar charts.

The relation between the colours in the charts of the seven Kundalini chakras and the numerical values of readings, as well as the information available therein about the activity of the chakras is as follows:

The following is a typical graphical format displayed with readings of the chakras.

5.1 Selection of subjects for the experiment

The subjects participating in this experiment were all seekers of SSRF from across the world who were visiting the SSRF ashram in Goa, India. They were placed in two groups – those with and those without negative energy distress. Ascertaining whether subjects had or did not have spiritual distress was done by spiritually evolved seekers having advanced sixth sense.

5.2 Number of subjects in the two groups

In all the experiments barring a few exceptions, the sample size of the group was 10.

The medical team in the ashram verified that the seekers participating in the experiment did not have any significant physical or mental illness during the entire course of the experiment or in the recent past.

6. Explanation of some of the words used in the experiment and their significance

Presence of negative energy distress means presence of centres in the body which can hold distressing vibrations. The chance of attack of distressing energies from the environment on the body of seekers who have spiritual distress is high.

Symptoms of distress appear in various forms at the physical, psychological and intellectual levels.

This refers to various symptoms like headache, body ache, indigestion, stomach ache, etc. that are not alleviated by medicines. However, they are alleviated by spiritual healing remedies. Other examples are loss of consciousness, sudden loss of vision, hearing impairment, loss of speech, rigidity of body, difficulty in breathing, severe weakness without any physical labour, etc. Here medical examination and tests are found to be normal. Again, the symptoms disappear after doing spiritual healing remedies. In such cases, the symptoms in the affected person are not due to any physical or mental illness.

Problems like lack of confidence, irritability, severe bout of anger triggered by trivial events, lack of enthusiasm, ideas of suicide without any cause, etc. can also be due to negative energy distress. These are also alleviated by spiritual healing remedies alone.

Problems like inability to make decisions, difficulty in thinking, and sudden increase in the number of mistakes in daily activities, etc. can be due to negative energy distress.

7. Nature of the experiment and method of noting observations

During each experiment, a record of readings was kept meticulously. Conclusions about the experiment were drawn based on these. To understand this better, please refer to the following table of readings of a subject before and after consuming non-vegetarian.

These are readings taken by DDFAO denoting the state of the seven Kundalini chakras before exposing the subject to the set of the two stimuli, such as consuming non-vegetarian food and vegetarian food.

Readings after exposing the subject to the individual stimulus

After being exposed to the stimulus, the first reading is taken. This shows the extent to which the person was impacted by the stimulus. Likewise the duration taken to come back to normal is another factor that helps us understand the extent of impact that the stimulus had on the subject. For this reason, readings of the patient were taken every few hours after the experiment.

The first scanning test was done after a minimum period of one hour and a maximum of four hours after exposing the subject to either of the two stimuli, such as consuming non-vegetarian food and vegetarian food. For example, in the given table readings A1, A2, A3 etc. were taken at regular intervals until these readings with scanning equipment were closer to baseline values.

The following observation tables were created in each experiment

8.1 Effect of the stimuli on the activity of the chakras

From this table we inferred whether that particular stimulus improved or reduced the activity of the chakras.

8.2 Duration of the effect after exposing the subject to each set of stimuli

From this table we inferred the duration of the effect of that particular stimulus.

9. Analysing the observations and taking input from the subtle-knowledge section

After analysing the observations we showed them to the subtle-knowledge section for their input on the reasons underlying the particular observations. Their input gave us insight into the following important factor to be considered during the analysis of the changes in chakras.

9.1 The upper four and the lower three chakras function as two independent groups

The following is a graphical representation of the DDFAO readings of a seeker, Mr. DG, after he had consumed non-vegetarian food. We can see that the graphs of the readings corresponding to the upper four chakras (depicted in yellow colour) and the lower three chakras (depicted in grey colour) have moved in the same direction. 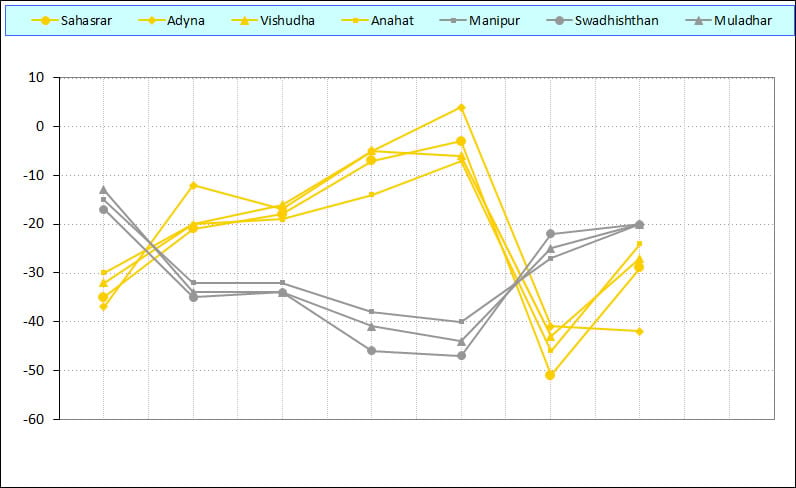 What is the reason behind this observation?

The following is an example of the questions we asked our subtle-knowledge section seekers:

The answers obtained through an advanced sixth sense shed light on what goes on in the spiritual dimension in response to day-to-day actions such as consuming food. That gave us a lot of insight on the spiritually correct lifestyle.

We will be sharing this with you in our series of articles on these experiments.