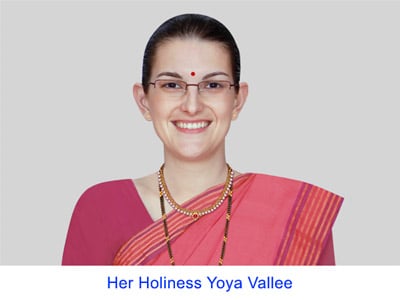 My husband (His Holiness Cyriaque Vallee) and I were going to leave the Ashram in Goa to go to France the following day. We had some urgent satsevas to complete before we left and we were working late at night. His Holiness Dr Athavale saw us working and told us to come and visit Him in His room when we felt tired. Around 4 AM, we began to feel tired, so we went to His room. His Holiness Dr Athavale was still awake and was writing matter for some Holy texts. He stopped what He was doing and gave us His full attention. He spoke to us about Spirituality and also asked us to perform some different subtle experiments. We lost track of time and the two hours we spent with Him seemed like only 30 minutes. Even though it was 6 AM and my husband and I had not slept, we felt fresh and energetic.

At this point, His Holiness Dr Athavale asked us to walk around the Ashram to see how we felt. As we were walking, we both suddenly began to experience energy entering through our fingers. We felt a strong prickling sensation. We also felt as if we were floating on air as we walked around and that all the objects around us seemed to be floating as well. I experienced Divine energy all around us and in all objects. I had the amazing and humbling experience that God is in all animate and inanimate creation.

At 7 AM we sat in the car to leave the Ashram. Shortly afterwards we both fell asleep quickly and later we realised how God had been providing us with the necessary energy that night to complete our satseva and to benefit from His Holiness Dr Athavale’s invaluable satsang before leaving.

Editor’s note : When seekers earnestly try to do satseva they often experience capabilities given to them by God which are far greater than what they are ordinarily capable of. In a similar manner, the Guru principle can endow a seeker with an elevated level of consciousness to enhance their faith and give them a glimpse of what it is to be spiritually evolved.

2. God recognising a seeker’s surrender through His Holiness Dr Athavale

I stopped to make a prayer while doing the satseva of drawing a subtle picture in the Ashram at Goa. I was trying to surrender my mind and intellect through the prayer so that the satseva would happen with concentration and as per God’s wish. While praying I went into a state of spiritual emotion and in that state, I felt I did not exist. When I opened my eyes after making the prayer, I was surprised to see a bowl of cashews on the table in front of me. My husband (His Holiness Cyriaque Vallee) and another seeker were sitting beside me with an amused look at my expression and began to laugh. They explained to me how the cashews got placed in front of me. They said that His Holiness Dr Athavale had come at the exact time I was praying and placed the bowl of cashews on my table. I was taken aback as I had not felt anyone come near me or that a bowl was placed in front of me. I realised that I was so engrossed in a state of spiritual emotion and surrender through prayer that I had lost awareness of my surroundings. I felt that God was pleased that I was trying to surrender the doership of the satseva to Him, so He placed the bowl of cashews in front of me through His Holiness Dr Athavale.